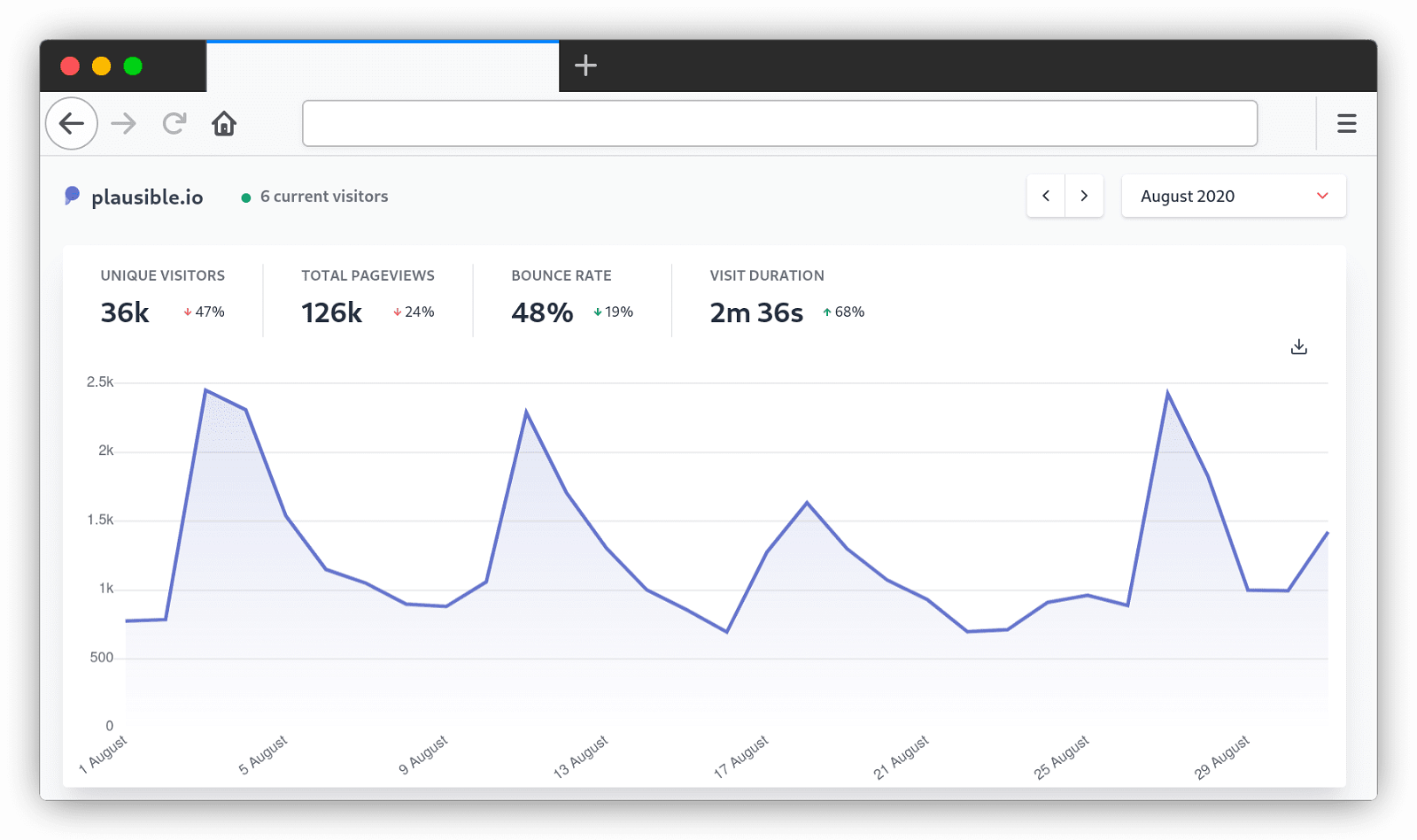 The recap for this month is a week late because I just got back from holiday. I’ve been working on Plausible pretty much non-stop all this year so it felt great to take a breather. We still got a lot done in August:

In August, we decided quite impulsively to launch on Product Hunt. It went really well, we ended up #2 of the day and #5 of the week. So far, PH has driven 2.8k unique visitors to our site and 50 signups that we can account for.

We didn’t announce the launch beforehand and we didn’t try to game the system by asking for upvotes from our community. We were relying on our existing customers to organically upvote and leave comments. I’m extremely grateful for everyone who helped us out.

All in all, Product Hunt was worthwhile but it’s not our core growth strategy. Launching on community sites gives your project a spotlight for a few days, but it’s not a sustainable channel to acquire customers in the long-term. As far as we’re concerned, launches like this are a ‘nice to have’ but they’re not necessary for continued growth.

The Product Hunt launch was all Marko, so let’s take a look at what I was up to on the development side.

Have you ever clicked on a page URL in Plausible expecting to see stats scoped to that specific page? I know I’ve done it a million times myself, so I was super happy to add the page drilldown feature. It gives so much more depth to the dashboard, especially when combined with the referrer filter.

For example, here’s the traffic from Google to plausible.io/open-source-web-analytics: 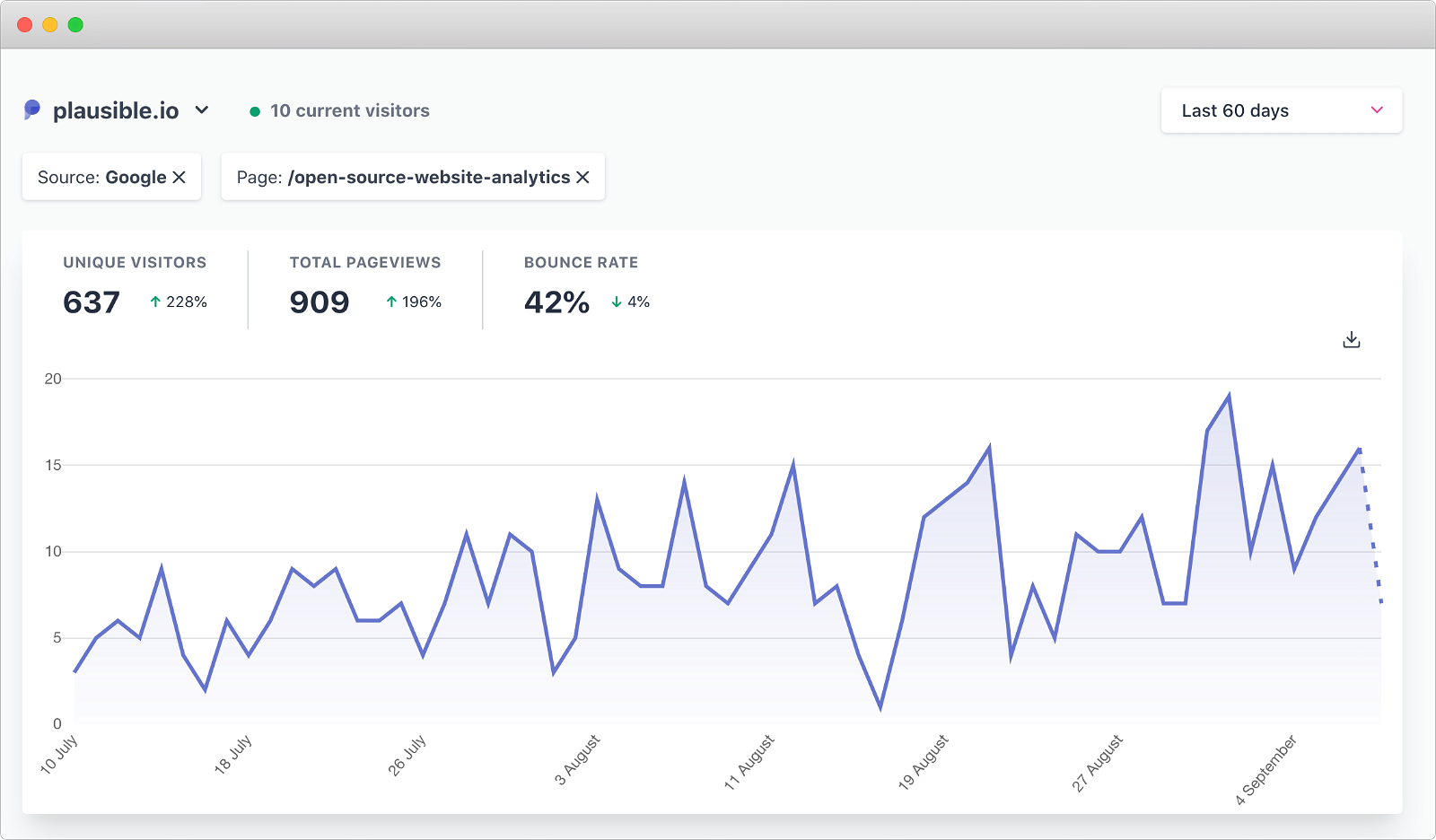 This sort of analysis is required for more advanced use-cases. It’s a challenge to keep the dashboard simple while also allowing arbitrary ways to slice and dice your data. For now, I think we’re balancing these two concerns quite well.

Plausible works with most modern SPA frameworks out of the box. Our tracking script listens for the pushState event and triggers a pageview automatically. However, some front-end frameworks use the hash part of the URL for navigation. In that case, the tracker should listen to the hashchange event to trigger pageviews.

This was a fairly easy change to make but what I found more interesting was the configuration. Instead of configuring the hash mode at runtime, I used a templating language to generate two different versions of the tracker. The new one is available at https://plausible.io/js/plausible.hash.js.

This way I don’t need to add configuration-related code to the tracker script itself. It keeps both the normal and hash-mode scripts more lightweight than if it was a single script configured at runtime.

I’m going to follow this pattern for future options that don’t need dynamic configuration at runtime. I’ve always wondered why this isn’t a more common approach. I personally love it when a library is designed such that you don’t need to ship anything superfluous to the client.

Other details from our changelog

I don’t have any big projects coming up in September. I’ll be mostly working on small improvements that have been requested on both GitHub and Twitter:

This list should keep me busy. The last two items require changes to the database schema which is going to be tricky. We don’t have infrastructure in place to run automatic migrations with Clickhouse yet, so it’s something I have to implement before I can build the features.